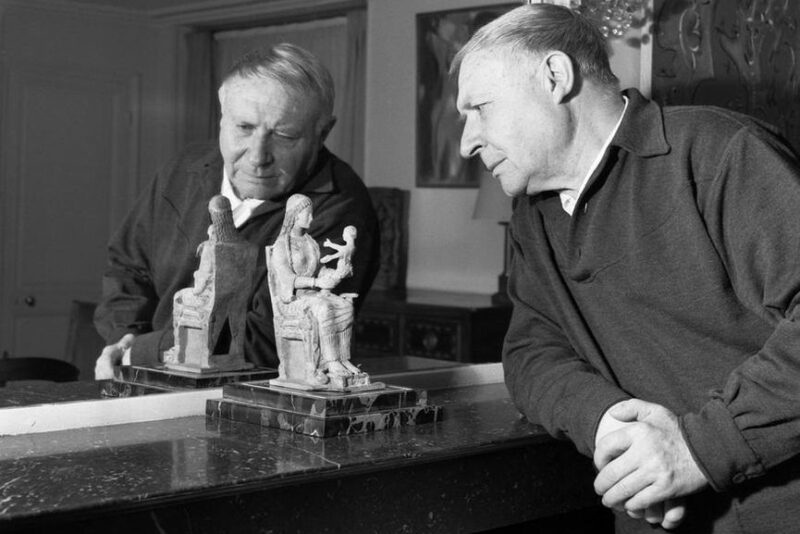 Masson was born on 4th January 1896 in Balagny-sur-Thérain, Oise, but when he was eight his father’s work took the family first briefly to Lille and then to Brussels. He began his study of art at the age of eleven at the Académie Royale des Beaux-Arts in Brussels under the guidance of Constant Montald and later he studied in Paris. He fought for France during First World War and was seriously injured. His early works displayed an interest in cubism. He later became associated with surrealism and he was one of the most enthusiastic employers of automatic drawing, making a number of automatic works in pen and ink. Masson experimented with altered states of consciousness with artists such as Antonin Artaud, Michel Leiris, Joan Miró, Georges Bataille, Jean Dubuffet, and Georges Malkine, who were neighbours of his studio in Paris. From around 1926 he experimented by throwing sand and glue onto canvas and making oil paintings based around the shapes that formed. By the end of the 1920s, however, he was finding automatic drawing rather restricting and he left the surrealist movement and turned instead to a more structured style, often producing works with a violent or erotic theme, and making a number of paintings in reaction to the Spanish Civil War (he was associated once more with the surrealists at the end of the 1930s). Under the German occupation of France during the Second World War, his work was condemned by the Nazis as degenerate. With the assistance of Varian Fry in Marseille, Masson escaped the Nazi regime on a ship to the French island of Martinique from where he went on to the United States. Upon arrival in New York City, customs officials inspected Masson’s luggage and found a cache of his erotic drawings. Living in New Preston, Connecticut his work became an important influence on American abstract expressionists, such as Jackson Pollock. After the war, he returned to France and settled in Aix-en-Provence where he painted a number of landscapes. He died on 28th October 1987.