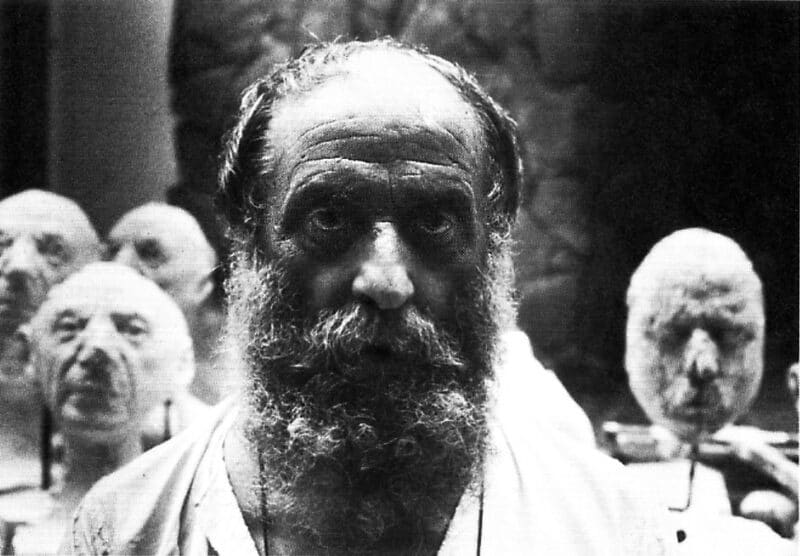 Cesare Baldaccini, born in Marseille in 1921 and better known as César, was one of the most relevant exponents of Nouveau Réalisme. Being an Italian-French sculptor, his fragments of reality are an object not resulting from an assembly, but from a transformation and camouflage, through an operation which wasn’t brutal or violent, but scientific, cold and critical. He studied at Ecole des Beaux-Arts in Marseille from 1935 to 1939 and then in Paris. César permanently moved to Paris in 1943 in a flat above Alberto Giacometti’s study, where he met Pablo Picasso, Jean Cocteau and Jean Paul Sartre. In 1947 he created works by employing chalk and iron, while in 1952 he started to make sculptures by welding iron scraps together: he was initially recognized by his massive sculptures representing insects, various kinds of animals, naked figures and others. His first important personal exhibition was held in 1955 in Paris at Salon de Mai. He was so successful that all of his displayed works were sold rapidly and the artist was invited to participate in Biennial of Venice in 1957, then in Biennial of San Paolo and in Documenta II in 1959, finally reaching New York in 1961. From the ‘70s on, the sculptor created a series of ‘controlled compressions’ which would have become the style of the new artistic language. Later in the same year César joined the group of Nouveau Réalistes which included Arman, Yves Klein, Martial Raysse, Jean Tinguely, Pierre Restany and others. In 1956 he started working with plastic: at first he employed plastic moulds reproducing fingerprints and in 1966 he poured expanded polyurethane, allowing it to expand and solidify. In 1966 the artist gave up sculpture in welded metal and from 1967 to 1970 he organized a series of events where he caused expansions in front of a public. His latest works included sculptures in molten crystal. He died in Paris in 1998.