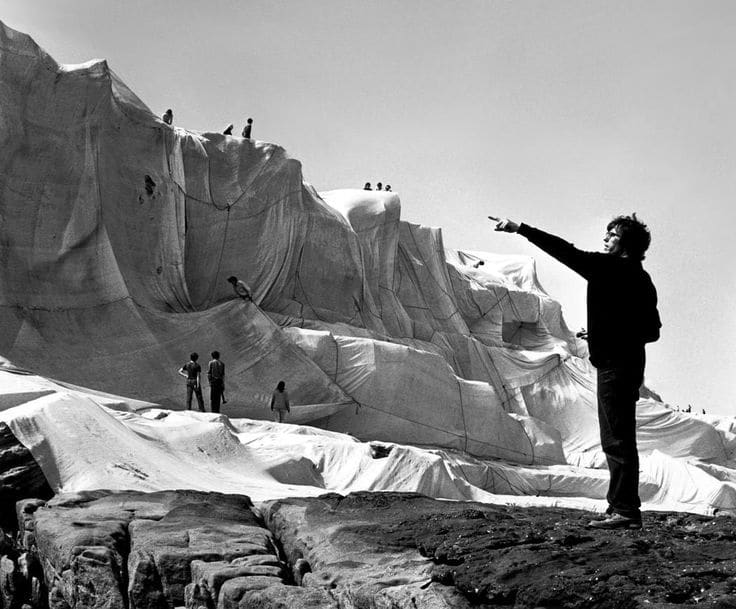 entrepreneurial origins. From 1953 to 1956 he concluded his studies at Academy of Fine Arts in Sofia. In 1956 he spent six months in Prague and the following year he completed a semester at Academy of Fine Arts in Vienna. In 1958 he was much better off after moving to Paris, where he met Jeanne-Claude Denat de Guillebon who became his wife in the same year. His first works are dated back to this period, like ‘Packages’ and ‘Wrapped Objects’. In 1961 he started a collaboration with his wife Jeanne-Claude and brought to life two creations of his which would have become legendary: ‘Projet d’un edifice public empaqueté’ (i.e. the first project of packing a public building) and ‘Stacked Oil Barrels’ (i.e. the stacking of thousands of oil barrels in Cologne Harbour). In 1964 Christo and Jeanne-Claude moved to New York. In 1966 they realized ‘Air Package’, an air package in suspension and ‘Wrapped Tree’, a tree packed by Stedelijk Van Abbemuseum in Eindhoven, Holland. In the following years several works were brought to life, such as ‘Wrapped Roman Wall’, the draping of a portion of ancient Aurelian walls and of a Roman gate, ‘The Pont Neuf Wrapped’, which is the draping of the most ancient and unique double bridge on Seine in Paris (40.876 square metres of interwoven polyamide and 13km of rope). In spite of all that, ‘The Umbrellas’ remained the most important work, especially due to the time it took to completion: about 7 years, from 1984 to 1991, as it is necessary to install 1340 blue beach-umbrellas in Ibaraki, Japan and another 1760 yellow beach-umbrellas in California, USA. Each umbrella was 6 meters tall and 8.7 meters wide. In 1992 Christo ventured on a project never completed to this day: ‘Over the River’, the proposal of covering an 11 km portion of Arkansas River in Colorado with a succession of cloth panels supported by steel wires.