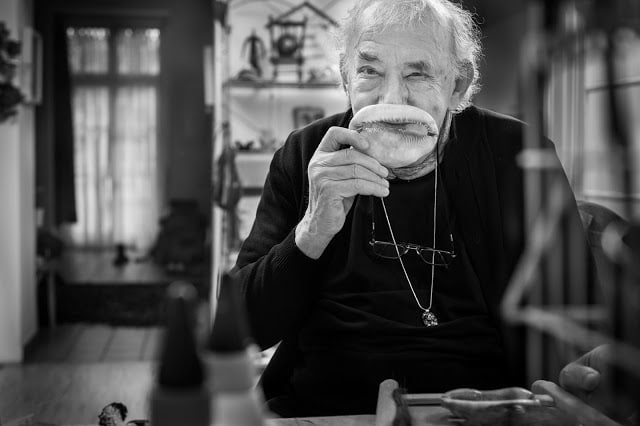 He was born in Galati in Romania on 27th March 1930. In 1942 after his father’s death, he moved to Switzerland with his family, which was his mother’s native country. He took his mother’s surname and was granted Swiss citizenship. In 1959 with Jean Tinguely he realized ‘Autotheatre’, where “the audience becomes actor and public” at Hessenhuis in Antwerp. He decided to settle down in Paris in order to plan Edition MAT (Multiplication d’Art Transformable) with a strong wish to rid the artistic product of its unique nature through the mass reproduction in multiples so that as many people as possible could enjoy the artistic work and the underlying creative process. Several artists joined MAT, such as Agam, Albers, Arp, Bury, Christo, Duchamp, Gerstner, Man Ray, Rainer, Roth, Saint-Phalle, Soto, Tinguely, Vasarely and others. In the same year he made his first Tableaux-Pièges (trap pictures). In 1960 Tinguely introduced Spoerri to Yves Klein; he signed the constitutive declaration of Nouveau Réalisme and participated in all the manifestations of the group. Trap pictures were exhibited for the first time at Festival d’Art d’Avant-garde of Porte de Versailles in Paris. In 1963 the exhibition 723 utensiles de cuisine took place at Gallery J, which was turned into a restaurant in the evenings: Aux fourneaux le chef Spoerri ‘Daniel’: Les critiques d’art assurent le service. Every dinner was matched by ‘menù-pièges’ consisting of remains left by table companions. Some contacts with Fluxus took place for the rest of the year. In 1970 he displayed objects made in dough at Gallery Al Vecchio Pastificio of Cavigliano in Switzerland. There was a long series of personal exhibitions by Lindner, Beuys, Ben, Niki de Saint-Phalle, Arman (accumulations of sausages, shrimps, cooked in jelly), César (compression of bonbons coated with chocolate) and Claude & Francois Lalanne present ‘Le diner cannibale’. Artworks were made by artists in personally selected materials and once they had been devoured, a signed certificate was issued to prove every specific artwork really existed. In Milan, on the 10th anniversary of Nouveau Réalisme, Spoerri prepared ‘The Last Supper, Funeral Banquet of Nouveau Réalisme’ and on Raymond Hains’s request, he prepared a ‘Torte de Milan, Entremets de la Palissade’ decorated with a thousand candles and cut by guest Professor Caramel. One year later in Amsterdam Spoerri realized a series of 13 pictures, where shoes for children were caught in mouse traps. This series was entitled ‘Les Dangers de la Multiplication’. In 1983 the artist organized ‘Déjeuner sous l’Herbe’ (Breakfast under the Grass) at Centre Culturel du Montcel, Jouy-en-Josas: the 40 metres long ‘tableau piège’ of a banquet was laid underground. At Mirabellengertens in Salzburg, with the help of students of the Internationale Sommerakademie, he created a labyrinth-intestinal route where visitors became part of the food which was chewed and finally discharged. One year later, still supported by students, he organized a gustatory route through Munich’s ateliers. In Rome he created the series in bronze known as ‘Warriors of the Night’. In 1990 Centre Georges Pompidou organized the biggest retrospective of his production, which was also displayed later in Austria, Germany and Switzerland. 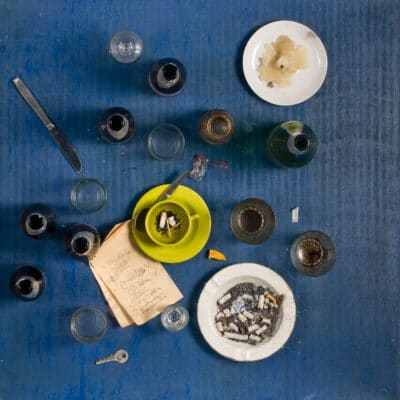