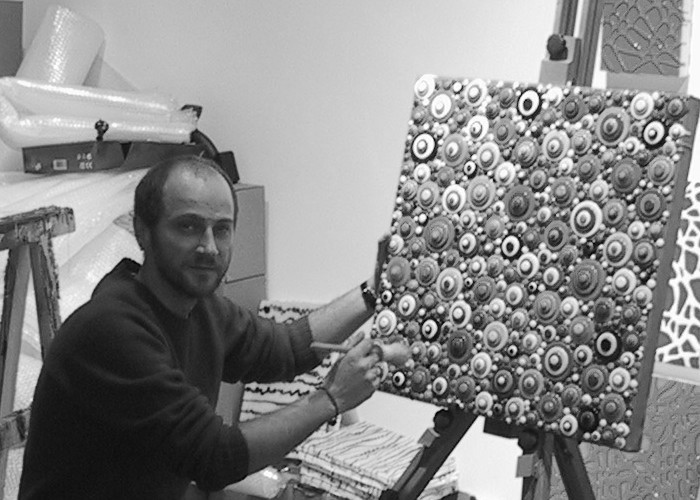 He was born in Senago, Italy in 1966. After having attended the art high school, he took a graduation at Accademia di Belle Arti di Brera in Milan. In 1989 he participated to the collective exhibition “Termine”, organized by Luciano Fabro at Chiostro della Juvara inTurin. In 1991 he was a protagonist of the exhibition “Accademia Aperta” at Accademia di Brera in Milan thanks to an artwork capable of expressing his artistic personality: a wide, ultra-light and handmade net. During his studies, he was selected among the other students of Accademia di Brera by Achille Bonito Oliva for the show “Imprimatur” in 1992 at Ex Chiesa di San Carpoforo in Milan. In this occasion he presented a nest. In 1992 at the exhibit “Splendente” Castello di Volpaia, he won the XI International Painting Prize “Grancia D’Argento” of Rapolano, Serre di Rapolano in Siena. He followed an artistic path which led him to express himself and to display his works through several solo and collective exhibitions, which took place in Italy and abroad, like: “40 x 40” at Galleria Continua of San Gimignano in Siena in 1994; “Sudbarolen Volkspartei Conrad Sohm in Dornbirn Austria in 1996. “Penthatlon” at Museo della Permanente of Milan in 2003; “Il nodo parlante” at Galleria studio la città of Verona in 2005; “52° Premio Michetti” In & Out at Fondazione Michetti of Pescara in 2005; “Davide Nido” at Galerie Gianna Sistu of Paris in 2007; Experimenta, Collezione Farnesina at Ministero degli Affari Esteri of Rom in 2008; “Spider Map” at Bonelly Contemporary of Los Angeles in 2008; “Premio Terna 02” at Tempio di Adriano of Rom in 2009; 53° Biennial of Venice at Padiglione Italia in 2009. He devoted himself to teaching activity with strong passion and he worked at Accademia di Belle Arti of Naples, of Turin and the one in which he had studied Accademia di Brera of Milan. Unfortunately he died prematurely in 2014.