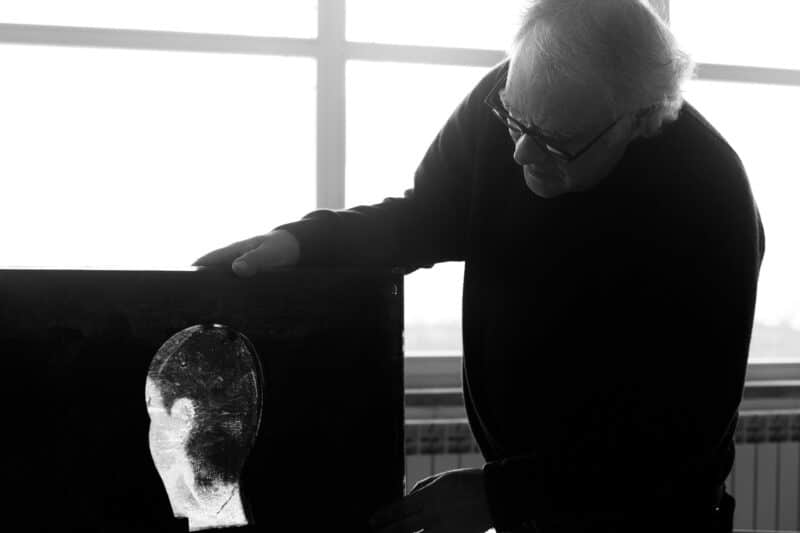 Domenico called Mimmo Paladino was born in Paduli (Benevento) on 18th December 1948. He attended the Art School of Benevento from 1964, a period in which the international scene was dominated by Minimalism and Conceptualism. In its first phase he focused mainly on photography, although he continued to cultivate his exceptional gifts as a draftsman. In 1977 it realized a big crayon on the wall of Lucio Amelio’s gallery in Naples and also participated in the exhibition “Internationale Triennale für Zeichnung” organized in Wroclaw. From 1978 to 1980 he lived a transitional period between the initial conceptual positions and the renewed emphasis on figurative painting. Typical of this phase were the monochrome paintings from the bold colours on which camped geometric structures, but also found objects such as branches or masks. The early ‘80s were characterized by the emergence of the potential of a painting reference. For “Open 80”, as part of the Venice Biennial, the art critic Achille Bonito Oliva offered the power of the Trans, which included Chia, Clemente, Cucchi, Paladino and the same. Through the review of allegory and symbolism, this group aimed to restore the myth, mystery and magic in contemporary art. This was followed then by the presence in important international festivals (Venice Biennial, the Sao Paulo Biennial, Biennial of Ljubljana, Tate Gallery, London, Miro Foundation in Barcelona, Paris Biennial, the Basel Kunsthaus, National Museum in Beijing, Forte Belvedere in Florence, Musée Royale des Beaux Arts in Brussels, etc.) through which his art was known abroad and immediately received widespread support. Paladino also dedicated to engraving: etching and aquatint, the linocut, woodcut masterfully interpreting the spectral character of its primordial figures. In his works he captured figures and forms inspired by art and the sometimes obsessive artefacts from cultures of past and present. Paladino’s visual language is neither narrative nor essential: it is fluid and ambiguous because art, in his way of expressing it, should not give answers but ask questions. His numerous solo exhibitions have been held in public museums and private galleries worldwide. His paintings and sculptures are in important public and prestigious private and institutional collections. He currently lives and works in Milan and Benevento.