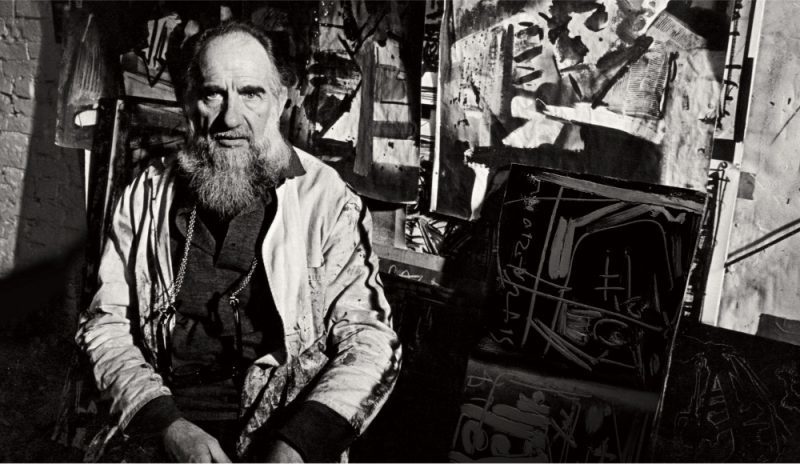 Emilio Vedova was one of the major Italian abstract expressionists, an absolute master of contemporary art, prominent protagonist of several Biennials of Venice. He was born in Venice in 1919 by a modest artisan family and since boyhood he showed a predisposition to drawing, creating a series of architectonic sights of his city, to which he soon associated as a self-taught person, painting and created several canvases in the ’30s and ‘40s, some of which depicted black and white figures, while others were characterized by a better chromatic vivacity. He was a convinced anti-fascist and despite his fondness of Futurism, in the years 1944 and 1945 he took part in Resistance. Earlier in 1942, he presented a work “Still Life with Skull” at Premio Bergamo, which effectively rendered his peculiar gestural communication and inclination to tragedy. In 1946 he was among those who signed the manifesto “Beyond Guernica” in Milan and in Venice he took part, along with other artists, in the foundation of the “New Italian secession” and of the “New Front of Arts”, which assigned a marked social value to art. In 1948 with “Hurricane”, “The Duel”, “The Guado”, “The Explosion”, “Death in the Sun”, he took part in the Biennial of Venice for the first time, becoming a future protagonist. In 1952 an entire hall was dedicated to him and in 1960 he was awarded Grand Prize for painting, until he got the prestigious award of Golden Lion in 1997. In the early ‘50s he embraced the informal sign-gesture-matter painting, abstract expressionism, imposing himself- as effectively defined by Giulio Carlo Argan – as “the Italian brother” of Pollock, De Kooning and Kline. To this profitable period we can date back “The Cycle of Protest” and “The Cycle of Nature”, characterized by a suffered concentration and intense anxiety. From the early ‘60s he worked on “Plurimi”, creations made with different materials, leaning on wandering supports, which invade space and the floor. From now on he would have been one of the few Italian masters to have a wide resonance while still alive beyond national boundaries, especially in Germany where he would have been constantly successful and in America, where he would have been invited several times to hold lectures at universities. His exhibiting activity includes important preparations, such as those of Civic Gallery of Contemporary Art of Turin (1996) and of Castello di Rivoli (1998): in those magnificent spaces his eternal vocation to ‘the beyond’ found its worthy agreement. The artist died in 2006.