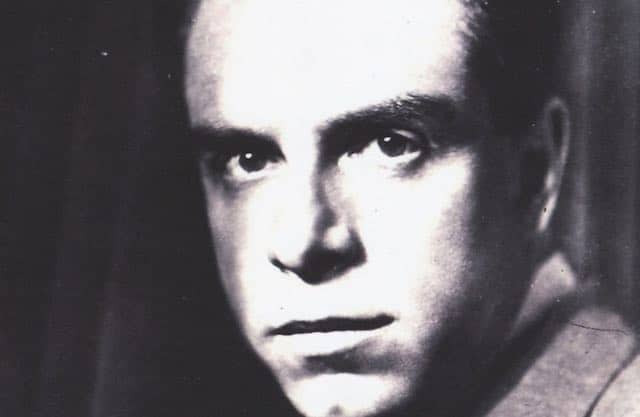 Prampolini was born in Modena in 1894. He was a painter, a sculptor, a set designer and a theorist. In 1912 he started attending the Academy of Rome as Duilio Cambellotti’s student, but he was expelled the following year because he had published a manifesto which was clearly against the academic doctrines. A little later he joined the futurists by attending Giacomo Balla’s studio. His research was characterized by the constant willing of experimenting different techniques. In 1914 he debuted during the 1st Free Futurist Exposition at the Gallery Sprovieri in Rome, where he presented abstract works made with different materials all together or separate. During the war he painted using a style next to the Synthetic Cubism, showing interest for the convergence between music, movement and shape. In 1916 he was in touch with the Dadaists, like H. Arp and T. Tzara. Subsequently he exhibited in Berlin with the Novembergruppe and elaborated the first abstract paintings. He was also in touch with the “de Stijl” and the Bauhaus. In 1922 together with Ivo Pannaggi and Vinicio Paladini, he published the Manifesto of the Mechanic Art, in which the machine was conceived as a model that orientated the shaping process of the art work towards a greater objectivity and structural rigor. In 1925 he was in Paris, where he remained there until 1937 and he got in touch with the Surrealism, by which he was influenced especially in what he called “cosmic idealism”, a pictorial style that combined biomorphic shapes and structures, also, sometimes, with multi-material supplements. He signed the Manifesto of the Futurist Aeropainting in 1929 and after a series of figurative compositions with grieving women (series of the Cassandre) inspired by Picasso, he definitely returned back to abstraction during the post war period, which was one more time the protagonist of the Italian artistic vanguard. Prampolini died in Rome in 1956.