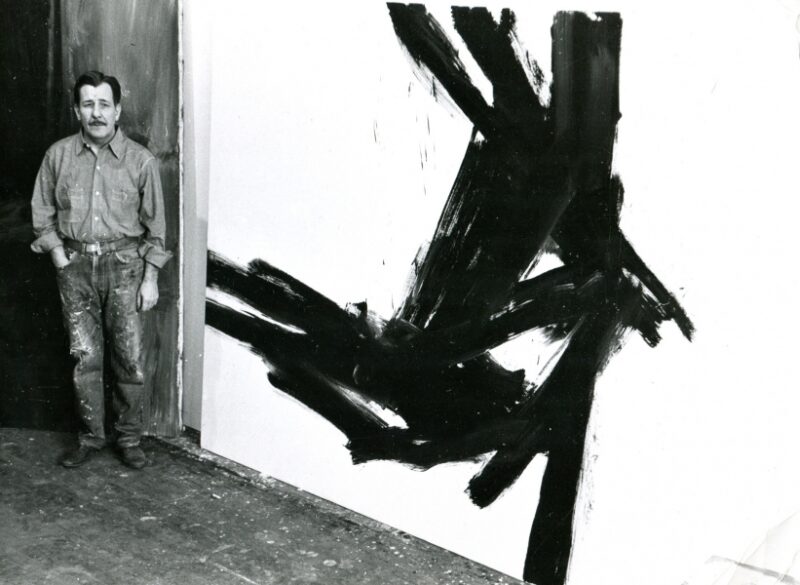 Franz Kline was born on 23rd May1910 in Wilkes-Barre, Pennsylvania. His native German father was the owner of a saloon and in August 1917 he committed suicide, probably due to financial problems. His mother started working as a nurse. Together with his brothers Franz, went to live at Episcopal Church Home in Jonestown, Pennsylvania. He was admitted to Girard College in Philadelphia and in 1925 he left school and came back in Lehighton with his mother, who had in the meantime got married a second time. In Leighton he attended high school, where he got very good marks in all artistic subjects. He entered for Boston University and attended courses at Boston Art Students League from 1931 to 1935. In the same year he moved to London, where he lived with Martha and friend Frank Hahn. He visited museums and galleries, copied artworks and drew urban landscapes. He studied at Heatherley’s School of Fine Arts from 1936 to 1938, where he attends painting and live-drawing courses. The next year he left Europe and settled down in New York. In the late ‘30s and ‘40s, Kline drew urban sights of New York and landscapes of the mining district where he spent his childhood. Murals and portraits were commissioned to him and in this period he also received prizes in some yearly reviews of National Academies of Design. In the middle of the ‘40s Kline started developing an interest in expressive possibilities of abstraction and simplified the components of his first realistic style, in which he resorted to colour and figuration. Around 1948 he magnified with a projector some of his black and white drawings. His expressive power and the magnificence of shapes and brush work confirmed his intention of adopting a style based on purity of abstraction. In 1950 Kline displayed an abstract painting at exhibition Talent 1950 at Kootz Gallery, organized by Clement Greenberg and Meyer Schapiro. Some months later Egan Gallery in New York dedicated his first personal exhibition to the artist. His participation in notorious Ninth Street Show, taking place at 60 East Ninth Street and in American Vanguard Art for Paris Exhibition at Sidney Janis Gallery, confirmed the artist as one of the most important figures in the emerging Movement of Abstract Expressionism. In the middle of the ‘50s, Kline reintroduced colour on his black and white palette initially in an irregular way and then with larger and larger segments. In 1956 Sidney Janis became his reference art-gallery manager and organized his personal exhibitions in 1956, 1958 and 1961. The artist held his first personal exhibition in Europe at Galleria La Tartaruga in Rome, followed by another one at Galleria del Naviglio in Milan in the spring of 1958. When he took part in Biennial of Venice in 1960, he travelled all over Italy for a whole month. In the decade before his death, his work was presented in important collective exhibitions, among which we find The New Decade: 35 American Painters and Sculptors at Whitney Museum of American Art in New York (1955), 12 Americans at Museum of Modern Art in New York (1956), and itinerant exhibition The New American Painting, organized by International Program of Museum of Modern Art in 1958 and presented in Basel, Milan, Madrid, Berlin, Amsterdam, Brussels, Paris and London. The artist also participated in international events, such as Biennial of Venice in 1956 and 1960, while he was present at Carnegie International in 1955, 1958 and 1961. He died on 13th May 1962 in New York.