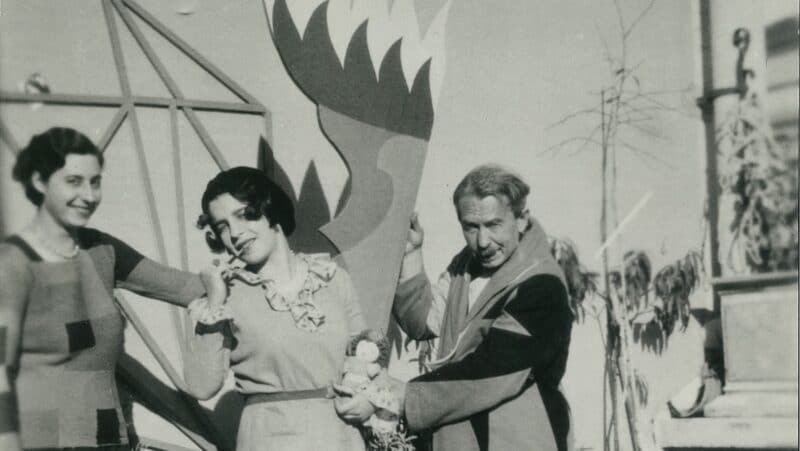 Giacomo Balla was born in Turin on 18th July in 1871. As a teenager he showed a predilection for art, studying violin. In Turin he attended an evening course of drawing and shortly began to study at Albertina Academy. In the photographic study of Oreste Bertieri, he had the chance to meet Pellizza da Volpedo. Pellizza da Volpedo and Plinio Nomellini, through their divisionism, had an influence on painting in late 19th Century. In 1895 Balla moved to Rome, where he attended Duilio Cambellotti and the group of intellectuals, who were devoted to the constitution of schools for peasants living in Agro Romano. Between 1902 and 1905 Balla realized four canvases (initially there should have been fifteen) of the ‘Cycle of the Living’: ‘The Beggar’ (1902), ‘The Peasant (The Greengrocer)’ (1903), ‘The Sick’ (1903) and ‘The Crazy Woman’ (1905). These were works in which divisionism was matched by a strong humanitarian drive, showing the artist’s deep attention for the oppressed and outcasts. In these years he met Umberto Boccioni and Gino Severini who regularly attended his study. In 1910 he joined futurism and participated in the drawing up of the manifesto ‘Futuristic Painting. Technical Manifesto’. Balla started his important research on dynamism, founded on Edward James Muybridge, Etienne-Jules Marey and Anton Giulio Bragaglia’s studies on photo-dynamism and chrono-photography. These artists led him to create paintings such as ‘Baby Girl Running on a Balcony’ (1912), ‘Dynamism of a Dog on the Lead’ (1912) and ‘The Violinist’s Hands’ (1912). The analysis of movement urged him to focus his attention on the motion of automobiles and he managed to convey the sensation of a speeding vehicle thanks to a grill of triangles of lights and shadows cast on curved and diagonal lines which were radiated from an internal or external point of the composition. We are referring to works such as ‘Dynamic Depths’ (1912), ‘Abstract Speed’ (1913) and ‘Automobile Speed’ (1913). Between 1912 and 1914 he was in Düsseldorf for the decoration of Lowenstein House and that was where ‘Iridescent Permeations’ came to existence. It’s a cycle of works which stand out as an early example of Italian abstract art. In 1915, together with Fortunato Depero, he drew up the revolutionary manifesto ‘Futuristic Reconstruction of the Universe’ which expanded futuristic poetics to various aspects of life (the manifesto referred to universe thus: “…We futurists, Balla and Depero, want to create this total fusion to reconstruct universe by cheering it up, which is to say by recreating it entirely…”), proposing to reinvent human environment by taking special care of fashion, furnishing, theatre. As for theatre, innovative is the scenography which Giacomo Balla realized in 1917 for the ballet ‘Feu d’artifice’, music by Igor Stravinskij, where human presence is replaced by rhythmic alternation of lights. In ‘Exposition Internationale d’Arts Décoratifs’ in Paris (1925), in which Balla took part with Fortunato Depero and Enrico Prampolini, his tapestries were awarded prizes. He got to sign ‘Aero- painting. Futuristic Manifesto’ in 1931 and took part in the first exhibition of Aero-painting. This exhibition was his last in the futuristic field, because our Turin’s artist started focusing his attention on figurative painting. His latest years were marked by a return to realism, as Balla himself stated: “…Pure art lies in absolute realism without which we would fall into decorative and ornamental forms…” (by Gianna Piantoni and Anne Pingeot, ‘Italie 1880-1910. Arte alla prova della modernità’; Umberto Allemandi & C. E Réunion des Musées Nationaux, 2000). Giacomo Balla died on 1st March 1958 in Rome.