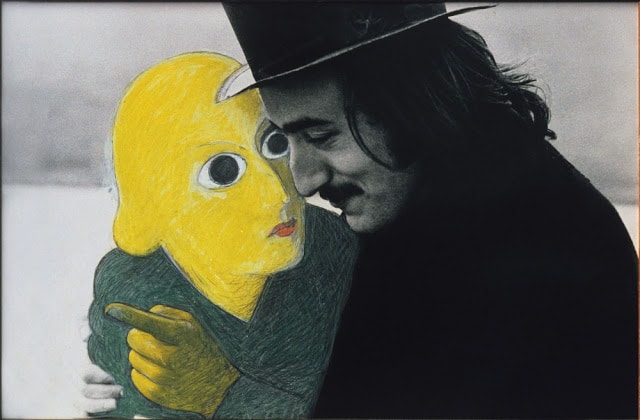 Born in Ancona in 1947, Gino De Dominicis formed his own artistic conscience at the art’s institute of the city with Edgardo Mannucci’s guidance. He exhibited for the first time his art works in a gallery of the city when he was seventeen in 1964. After having travelled a lot, he settled in Rome, where he exhibited some prematurely realized works in 1969 and published his Letter on the body’s immortality. De Dominicis’ artistic search can be divided in two periods: the first is included between the end of the ‘60s and the end of the ‘70s and it was mistakenly defined more conceptual; the second is included between the first years of the ‘80s and 1998, the year of his death, and it was more figurative and pictorial. Some works from the first period of activity have become famous. The two videos “Attempt of making squares instead of circles around a rock falling in the water” and “Attempt to fly” were created in 1969 like also the sculpture “The time, the mistake, the space” where a human skull on a rollerblade keeps a bar in equilibrium with a finger, while simultaneously keeping on a leash a dog’s skull. During 1969 he exhibited some invisible objects such as “the Cube, the Cylinder, the Pyramid”, showed only by their perimeter traced on the floor. Furthermore, during the end of the ‘60s, the mythological figures of Urvasi and Gilgamesh appeared for the first time: they were fated to be represented by him in different shapes and occasions during his entire artistic career. From 1970, it is relevant “Zodiac”, in which he represented concretely the twelve zodiacal signs showing a bull, a lion alive, a young virgin and two dead fishes leaning on the floor. During the Venice’s Biennial in 1972 he presented the work “Second solution of immortality (the Universe is motionless)” in which Mister Paolo Rosa, a young man suffering from the Down’s syndrome, was sitting in a corner and in front of him there were an invisible cube, a rubber ball (fell from a height of two meters) in the instant before the rebound and a rock waiting to be moved. In 1973 there was a cocktail party in Rome to celebrate the overtaking of the second principle of thermodynamics and in 1975 it took place an exhibition which could be visited only by animals. From the end of the ‘70s, De Dominicis dedicated himself almost exclusively to pictorial works and drawings, in fact the works of this period are mostly figurative, realized with basilar techniques such as the tempera and pencil on board or on paper and more rarely on canvas. This was an extremely positive period for the exhibitions, during which he joined some very important international celebrations, besides various appearances at the Venice’s Biennial. In 1982 he didn’t accept the invitation to the Documenta of Kassel and in 1985 he won the International Prize of the Paris’ Biennial. In 1990, during a anthological exhibition at the Museum of Contemporary Art of Grenoble, he exposed for the first time “Cosmic Calamity”, a giant human skull twenty-four meters long, nine meters large and almost four meters high, leaning on the floor, perfectly represented from the anatomic point of view except for the long nose, which is a characteristic sign of De Dominicis’ works. He died on 29th November 1998 in Rome.

Official website of Gino De Dominicis
← Back to artists