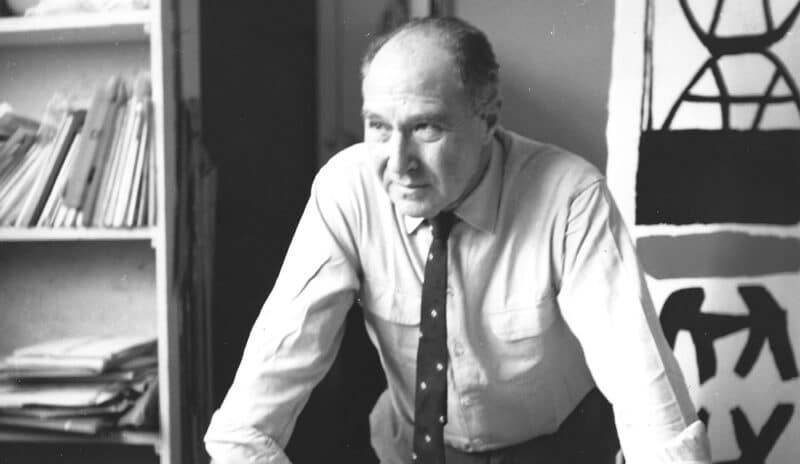 Giuseppe Capogrossi was born in Rome on 7th March 1900. He attended the classic studies in high school and later he took a degree in law. With Felice Carena’s guidance he started his studies of art and his first exhibition took place in 1927 during a collective show at the Gallery Dinesen. In 1930 he joined the 17th International Biennial of Art in Venice and in 1932 he exhibited at the 3rd Show of the Fascist Syndicate of Fine Arts. In this period he also consolidated the friendship and the work relationship with Cagli and Cavalli, with whom he exhibited during the same year in Rome and presented in 1933 the same show in Milan at the Gallery “Il Milione”. In December, always together with Cagli and Cavalli, he exhibited in Paris at the Gallery Jacques Bojan. The introduction for this exhibition was written for them by Waldemar George, who identified them in the “Ecole de Rome” (Roman School). Capogrossi was invited many times during the period from 1934 to 1968 at the International Biennial of Art in Venice (1936 – 1948 -1950 – 1952 – 1954 – 1962 – 1964 – 1968). From 1935 to 1959 he exhibited several times at the National Four-Year of Art in Rome (1935 – 1939 – 1943 – 1955 – 1959). During the years 1936, 1937 and 1938 he sent his works to the exhibition of the Fascist Syndicate of Fine Arts. He also participated to the Bergamo Award in 1939, 1940 and 1942. In 1949 he went to Austria for a period of time and he started exposing at shows in Linz and Vienna. In 1950 he exhibited in Rome his first no-figurative works. In 1952 he joined the Spatial Group of Milan together with he exposed in different shows and in 1954 he received the Einaudi Award. His first monograph written by M. Seuphor was published in 1954. In the following year he attended the exhibition Documenta I of Kassel and the III Biennial of S. Paolo. He also held a personal show at the Galleria del Cavallino, where he was introduced by G.C. Argan. In 1957 he won the Bari Award. Two years later, in 1959, he participated to the III Biennial of Graphic in Venice and received the prize for engraving. In 1962 a room was dedicated to him at the 31th International Biennial of Art in Venice. He also gained the award ex-aequo with Morlotti. His second monograph written by M. Tapié was published. In 1968 he was at the exhibition “Spatialism” of Vicenza and at the show of the National Gallery of Modern Art “A hundred works of the Italian art from the Futurism to now”. In 1971 the Department for Education and Skills gave him a gold medal for cultural deserts. He died in Rome on 9th October 1972.