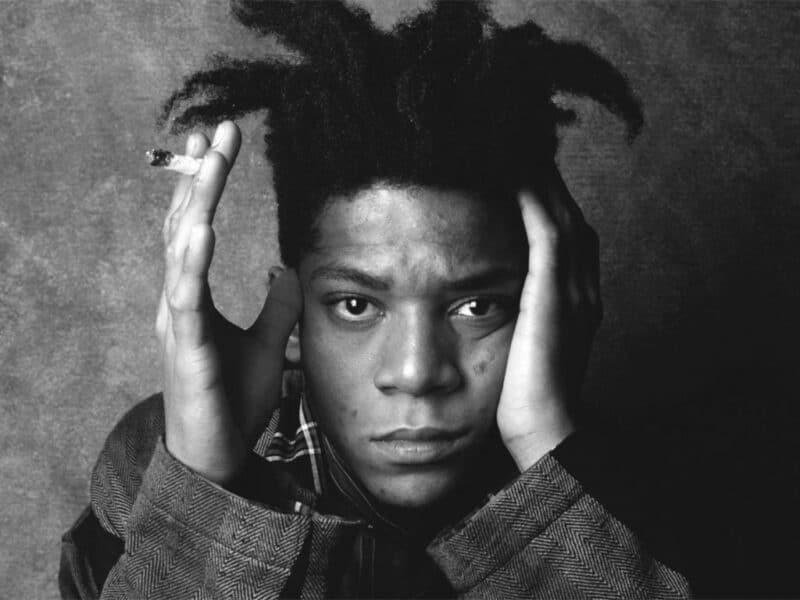 Jean-Michel Basquiat (New York 1960-1988) grew up in a broken-up family. He early left school and in 1977 he entered the world of graffiti by painting on underground wagons and in some Soho areas. The pseudonymous SAMO, “same old shit”, became his signature on tags and graffiti and it was of great importance in his life. Along with Keith Haring, he was one prominent figure on the artistic scene of the 80’s in New York. The wall of the city was meant as the canvas of a painting, it represented a notebook for notes suggested by the metropolis. His paintings and writings are characterized by a great poetic, philosophical and satirical power. Basquiat was a black artist and the heir of pop art. In his short existence and exuberant production, he has become a myth, such a fascinating and ‘cursed’ figure that can be compared to James Dean. Basquiat’s painting can’t be classified in an official trend. He described himself as ‘an analphabet artist’, maybe because of his childlike works and language. The usage of painting seems to be nearly instrumental: he creates writings and not proper images, painted words, inserted in or next to primitive figures, often brutal, realized through heavy signs and colour blurs with no order. His first exhibition was prepared in 1980 in a forsaken warehouse in New York and displayed artworks which had been created by punk artists and graffiti designers. The ‘wild child’s works’ started to be soon appreciated by collectors, but his acknowledgement became even wider, when he worked with Andy Warhol in 1983 and 1984. He died of cocaine overdose.