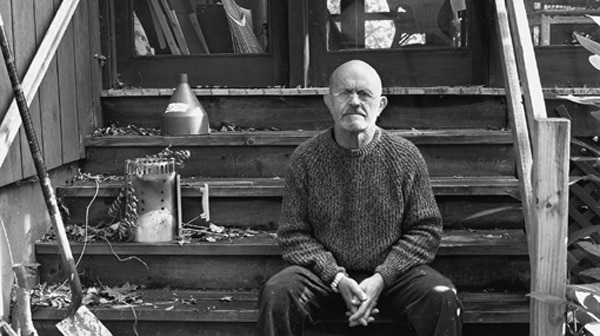 He was born in 1935 at Cincinnati in Ohio. He studied at the University of Cincinnati and at Boston School of Fine and Applied Arts in Massachusetts from 1953 to 1957. In 1957 he received a Bachelor degree of Fine Arts from the Ohio University. After graduation, he moved to New York City in 1959 and became involved with Robert Rauschenberg, Claes Oldenburg and Roy Lichtenstein whose work moved away from abstract expressionism toward pop art. He staged his first Happenings with Claes Oldenburg and Allan Kaprow at the Judson Gallery in New York and he had his first one-man exhibition at the Reuben Gallery of New York. Dine incorporated images of everyday objects in his art, but he diverged from the coldness and impersonal nature of pop art by making works that fused personal passions and everyday experiences. His repeated use of familiar and personally significant objects, such as a robe, hands, tools and hearts, was a signature of his art. In his early work, Dine created mostly assemblages in which he attached actual objects to his painted canvases. From 1959 to 1960, Dine was a pioneer of happenings, works of art that took the form of theatrical events or demonstrations. Between 1960 and 1965 he had various guest professorships like those at Yale University in New Haven and at Oberlin College in Ohio. He was represented at the Venice Biennial in 1964 and at the documents “4” in Kassel in 1968. In 1967 Dine and his family moved to London, where he devoted his energies to printmaking and drawing. From the early 1970s Dine’s oil paintings, prints (perhaps his most successful work, usually sensitive and simple depictions of tools, robes, etc.) and drawings became increasingly figurative. Dine’s attention turned to sculptural work in the early 1980s when he created sculptures based on the sculpture Venus de Milo. His recent art uses imagery borrowed from ancient Greek, Egyptian, and African objects. In his paintings, drawings, sculptures, graphics, collages and assemblages he combined different techniques with handwritten texts and words and set real everyday objects against undefined backgrounds. The objects are both commonplace and personal, both poetic and ironic, reflecting his feelings about life. His constantly varied bathrobe, transparent to the gaze of the world, was a kind of metaphor for a self-portrait.