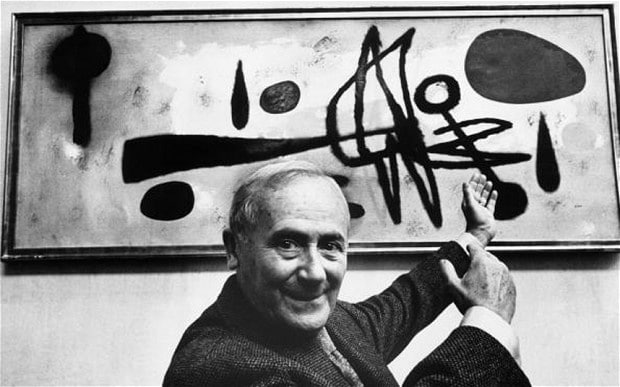 Joan Miró was born in Barcelona on April 20th 1893. He showed a very early attitude to drawing. In 1910 he settled down in the countryside, in a family estate in Montroig, which would have had a direct and indirect influence on most of his work. In 1912 he joined School of Art in Barcelona; he discovered fauvism and held his first exhibition at Gallerie Dalmau. He spent the following year in Paris, where he met Picasso and Tristan Tzara’s club Dad by which he felt very attracted. His painting at this time already seemed to be very original and was characterized by a realism transformed by accentuation and addition of numerous details which gave imagines a nearly hallucinatory aspect. From this period he attended Parisian clubs and in the summer of 1923, he started working in Montroig on “Ploughed Land”, which marked the passage to surrealism. After having met Pablo Picasso and Pierre Reverdy, Mirò got in touch with Masson and in 1924 joined the surrealistic movement. From 1927 Joan Miró started to experiment the «picture-poem», the direct inscription on canvas of some poetic sentences. However in 1928 Joan Miró embarked upon new researches: he developed the idea of reinterpreting, through the game of mental associations, the pictures by masters of the 17th century and publicity as well, morphing a diesel engine into the portrait “Queen Luisa from Prussia” (1929). The same process of disintegration and reconstruction was applied by the artist on paper works, collages and surrealistic objects. In 1930 we see lithographs (the first ones of a wide production) for the Tree of Travelers by Tristan Tzara. In 1933 he ventured on copper etching and sculptures. From 1934 to 1937 the artist’s work was characterized by an intense experimentation linked to different typologies of supports for one’s own painting (sandpaper, tar paper), while the artist went back to the poetic interpretation of “reality” as in the early days of his career. Profoundly shocked by the war in Spain, in 1937 he made a mural painting for the pavilion of republican Spain at the International Exhibition “The Mower” in Paris. As Paris started to be occupied by German, he came back to Spain and lived in absolute isolation (Palm of Majorca, Montroig, Barcelona), explicitly refusing to take part in artistic manifestations organized by Francoist regime. Miró seemed to focus his pictorial activity on old topics, although at that time we also find one of his masterpieces: “Metamorphosis” of a man’s portrait (XIX century). In 1947 he made his great mural decoration for Hotel Terrace Palace in Cincinnati, created during his first trip to America, while the decoration of the monumental ceramics wall for UNESCO Palace in Paris was dated back to 1958. In the early ‘60s he visited America twice, where he received prizes and awards and also was influenced by informal American painting. His production never sought complete abstraction, but a surreal language poetically simplified. In the last period he focused on fantastic triumph of pure colour, in a joyful formal liberty. On 25th December 1983, at the age of 90, Joan Miró died in Palm of Majorca and was buried in Barcelona.