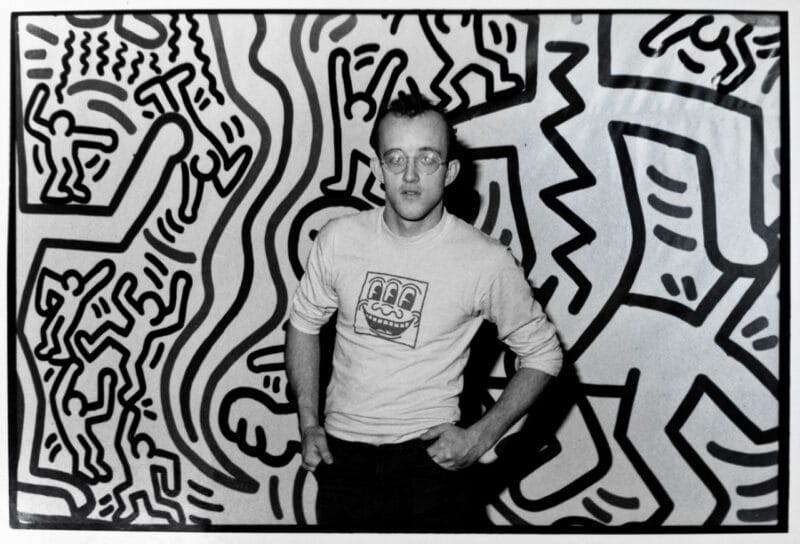 Keith Haring is one of the leaders of the neo-pop trend and nowadays he is regarded as the most representative artist of his generation. He was the son of Joan and Allen Haring and the eldest of four brothers. He was born on 4th May 1958 in Kutztown, Pennsylvania. As a young boy, he already revealed his artistic talents, and after having attended high school, he was admitted to Ivy School of Professional Art in Pittsburgh. In 1976, following the new youth contestation and the rising hippie culture, he travelled all over the United States hitch-hiking, visiting various cities and experiencing something which enabled him to take a close look at the masterpieces by American scene’s artists on the covers of specialized magazines. On his way back from Pittsburgh in 1976 he started university and held his first important exhibition at Pittsburgh Arts and Crafts Centre. He was deeply rooted in New York street art culture and before his consecration in the official art world; he lived an early moment of total marginalisation. In 1978 he started School of Visual Arts in New York, becoming well-known in the early 80’s through murals realized in the undergrounds and later thanks to works displayed in various places, ranging from Clubs and ‘vernissage’. His favourite subject was “radiant baby”, with which he started his career, spreading it on hundreds of subway advertising panels. At that time he employed white chalk, until he discovered felt pen which offered infinite possibilities and changed his life, allowing him to obtain indelible images. However, this new pictorial language proposed by the artist was explosive and naturally attracted the attention of most malicious experts. Keith Haring followed in the footsteps of his unconscious model Andy Warhol and invented a new urban language, based on primitive silhouettes characterized by a continuous black mark which reminded us of the comics’ world. His first personal exhibition dated back to 1982 and took place in Shafrazi; the following years were full of successes and exhibitions all over the world. He was by now an accomplished and acknowledged artist, which concretely meant he was very rich. Bizarre and daring, he led a reckless and disorderly life, especially when it came to sex. In 1988 he was diagnosed with AIDS and by making a public announcement in an interview for notorious magazine “Rolling Stone”, his popularity soared even higher. Before dying, he created Keith Haring Foundation, which to this day keeps supporting organizations in favour of children and research on AIDS. The artistic value of Haring’s wide production was never questioned, supporting large business according to the ‘commercial’ spirit of his new art: his compositions are immediate, simple and direct, easily catching observers’ attention and it can be read on different levels, ranging from an amusing superficiality to the discovery of hallucinatory biting humour. Keith Haring passed away on 16th February 1990 at the age of 32.