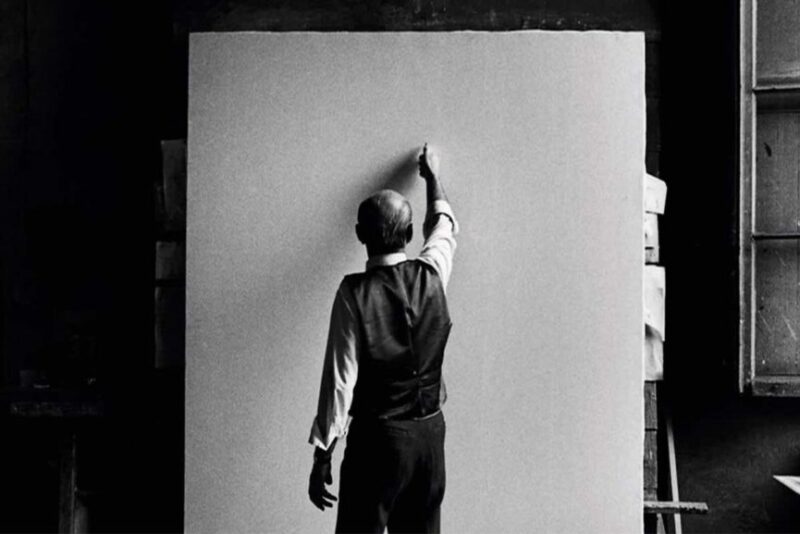 Lucio Fontana was born on 19th February 1899 in Rosario Santa Fé in Argentina from a sculptor father and a theatre actress mother. At the age of six, he went back to Milan in Italy to attend school and started his apprenticeship as artist in his father’s shop. In 1917 he interrupted his studies and went to the military front as a volunteer, but he got wounded and he was discharged after being awarded a medal for military valour. Lucio Fontana finished high school and entered Brera’s Academy of Fine Arts in Milan, but two years later, in 1922, he went back to Argentina, where he first worked with his father, but he soon opened his own sculpture study. In 1928 Lucio Fontana went back to Italy to resume his studies at Brera’s Academy of Fine Arts, where he graduated in 1930 after having attended Adolfo Wildt’s courses. In the ‘30s Lucio Fontana founded ‘The Space Movement’ and thanks to the support of other intellectual artists, he published ‘The First Manifesto of Spacialism’, closely followed by a second manifesto the next year. In 1949 he displayed a source of great enthusiasm and dissent at the Gallery of Naviglio: the ‘Spatial Environment in Black Light’. Seeking a third dimension, Lucio Fontana experimented the world of painting, realized his first pictures by piercing canvas and started the ‘cycle of holes’. During his first experiments of three-dimension painting, Lucio Fontana continued his activity of ceramist in Albissola and started to collaborate with avant-garde architects. In the ‘50s Lucio Fontana continued to work on the cycle of holes, but he also employed glass and started the ‘cycle of stones’. Experimenting even further, Fontana applied colour, ink, crayons, collages, spangles and glass fragments, apart from piercing canvases. In 1957 the first ‘cuts’ appeared in a series of works made in linen paper. At this stage, Lucio Fontana was well-known and appreciated all over the world: he participated in international manifestations more and more frequently. Important museums and galleries purchased his works. In the ‘60s Lucio Fontana started the ‘cycle of oils’, creating some of large dimensions, infused with Venice, which he displayed in a personal exhibition in New York. Lucio Fontana died in Varese on 7th September 1968, leaving his works in permanent collections in over than 100 museums worldwide.