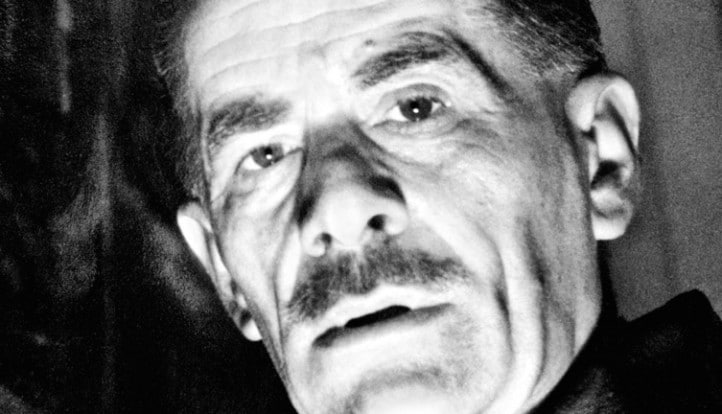 Mario Sironi was born on 12th May 1885 in Sassari by a family from Lombardy. He spent his youth in Rome, where he had moved to with his parents in 1886. In 1902 he signed in for the engineering’s college, but one year later he abandoned it to dedicate himself to painting. He started attending the Nude’s School at the Academy of Fine Arts and the studio of Giacomo Balla, who had a large number of followers during those years among the young roman artists. He met Boccioni and Severini, who were committed with Balla in testing some pointillist methods that were used also by Sironi in this period. After a brief stay in Milan, from 1905 to 1908, he went to Paris and to Germany. In 1909 he came back to Rome and stood there until 1914. He was still in contact with Balla and paid attention to the development of the futurist theories, which he joined pretty later, around 1914, when he definitely moved to Milan. Although he joined futurism, it was soon evident that his creative temperament was not in total agreement with neither the futurist revolution nor with the analytical breaking up of the cubists. At the war’s outbreak, coherent with the futurist idea of intervening, he enlisted. He was attracted by the revolutionary ideals of fascism, so he joined it and in 1922 he became the illustrator and coordinator of the Popolo d’Italia, the newspaper of Milan created by Mussolini. From 1928 he took control of the section of the art’s critics. Also in 1922 he formed at the gallery of Lino Pesaro in Milan, the Gruppo del Novecento, which would later be the Italian Novecento, supported by Margherita Sarfatti. Sironi was a part of it from the beginning, gaining a position of growing prestigious. During these years and until the ‘40s, Sironi’s activity was particularly intense: painter, cartoonist and posters’ drawer, journalist, coordinator, sculptor, architects’ collaborator for preparations of important exhibitions. There were a great number of expositions of the Novecento in Italy, in Europe and in the United States. Sironi was the most genious artist of the group. The Carnegie of Pittsburgh gave him the second international award in 1931. In December 1933 he signed together with Campigli, Carrà and Funi, the “Manifesto della pittura murale” in the magazine Colonna of Milan. Since he believed art was to be public and collective, Sironi was committed to the activity of decorator with paintings a fresco, mosaics and sculptures. The changed political situation of the post-war period, represented to him an abrupt and definitive turn. The artist withdrew himself in its studio, putting aside the ideal of operating on a large surface. His work was almost completely reduced to the painting on easel. He painted canvas which seemed sketches for walls or notes for great works he wouldn’t have realized. In 1952 he refused to expose at the Venice’s Biennial, but his presence in different National and International exhibitions was constant and purposeful. We must remember among the personal ones: Gallery Annunciata in Milan in 1946 and 1950; the Gallery of Naviglio in Milan with Rosai in February 1950; Gallery Birch of Copenhagen in October 1952; Gallery Per of Oslo in January 1953; in Boston, San Francisco and other five North American museums in 1953; Gallery of Milione in Milan in June 1954. The artist died on 13th August 1961 in Milan.