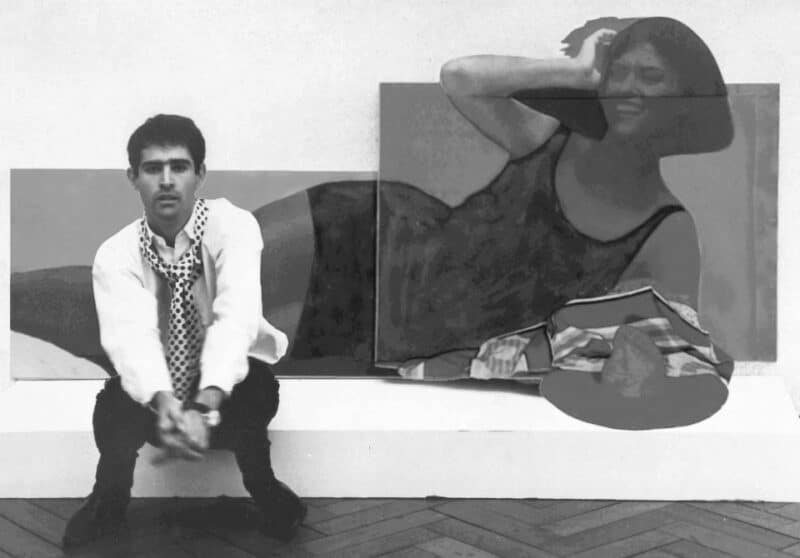 He was born in Golfe Juan in France on 12th February 1936. He studied literature, but then abandoned his studies to dedicate himself to painting. At the end of the ‘50s he painted abstract pictures, obtaining a discreet consent. Fascinated by the invasion of new consumption materials made in PVC, he turned his whole career upside down, explored all sorts of warehouses and supermarkets in search of various coloured objects made in plastic. In 1960 he started to participate in all manifestations of Nouveau Réalisme, signing its constitutive declaration. In 1964 there were several exhibitions, some of which took place at Dwan Gallery in Los Angeles. In June and July we can mention Fontana, Martial Raysse at Salon Apollinaire in Venice. From July to October there were ‘Cinquante ans de Collage’, at Musée d’Art et d’Industrie in Saint-Etienne, at the Musée des Ars Décoratifs in Paris and ‘Mythologies Quotidiennes’ at Musée d’Art Moderne in Paris. From July to September there was ‘Figuration et Défiguration dans l’Art’ at Musée des Beaux Arts in Gand. From November to December there were ‘Made in Japan…Tableau horrible…Tableau de mauvais gout’ at Galerie Jolas in Paris and then in New York in 1965. We are dealing with photographic montages coming from famous pictures of the 19th century, such as ‘Le Bain Turc’ by Ingles, in which neon lighting was inserted and phosphorescent colours were employed. In 1966 he participated in XXXIII Biennial of Venice in the French pavilion, winning the special prize reserved to artists under 45. In collaboration with Tinguely and Saint-Phalle, he prepared scenarios and costumes for the ‘Praise of Folly’, a ballet by Roland Petit which was staged at Thèatre des Champs-Elysées. In the same year the artist made his first ‘Tableaux à Géométrie Variable’: these women’s portraits were obtained through a juxtaposition of panels assembled in open order. To the artists these faces evoked “our existence where all elements are profoundly heterogenic, but were put into cohesion by a will which mingles with the notion of life itself”. The year 1969 was also marked by the participation in various collective exhibitions: ‘European Painters of our Days’ at the Jewish Museum in New York; ‘French Art since 1900’, at the Royal Academy of Arts in London, ‘Plane und Projekte als Kunst’, Kunsthalle in Berna, ‘Peintres Européens d’Aujourd’ hui, Musée des Arts Decoratifs in Paris. From September to October, there was ‘Une Forme en Liberté’ at Galerie Lolas in Paris (later in New York until 1970). Through the elimination of every anecdote, previous researches on feminine faces led to a reflection on the independence of the shape in front of ‘the contingencies of its representation’, whatever its format or support material could be, either carton and metal or paper. We must also mention the production of the movie ‘Camembert Martial Extra-Doux’, coloured 16 mm: “some good people taste a hallucinogenic camembert; continuation and ending”. Scene and costumes were from Votre Faust, a work by H. Pousseur and M. Butor, staged at Piccola Scala in Milan. From October to November there was ‘Retrospective Martial Raysse’, works and subjects at National Gallery in Prague. In June 1976 Raysse displayed ‘Loco Bello’ at Galerie Finkler in Paris: this exhibition is the result of three years’ work. These drawings, pastels, aquarelles and sculptures illustrate rupestrian or Dionysian themes, sometimes with a certain dose of humour. From July to September the artist participated in XXXVII Biennial of Venice and he did also in 1982. The gallery is integrated in the territory and collaborates with public institutions by which exhibitions are supported. Every exhibition is matched by the publication of wide monographic volumes prefaced by essays written by critics and intellectuals. Here a careful collector, who wants to enrich his collection with new pieces, will find artworks whose ascertained value is destined to increase in the course of time.