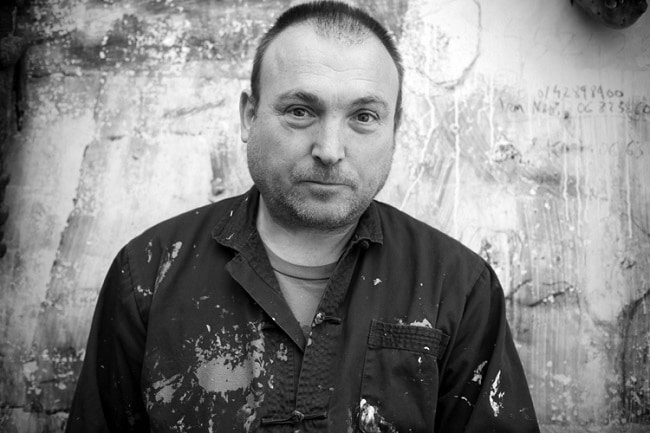 The artist was born in Felanitx, Majorca in 1957. After spending two years at School of Arts at Palma de Majorca, Barcelo’ entered the Academy of Fine Arts in Barcelona in 1974. In 1975 he went back to his native town, where he joined the conceptualistic group ‘Taller lunatic’ and participated in the creation of the magazine ‘Neon Suro’. During the ‘80s he travelled all over Europe, United States and Western Africa. The reality expressed on Barceló canvas turned out to be particularly complex, intertwined with Majorca’s ethnography, ranging from the skeleton African primitivism to opaque precarious Parisian modernity. By observing the different relationships which Barceló established between shapes and objects, it is clear that he did not paint objects with an autonomous value, but the differences between these along with the emotions that objects themselves awakened in him. Thematic innovation is always matched by formal innovation: sand, animal bones, elements of African land become a part of the artwork in this continuous process which is innovative, aesthetic and formal. Miquel Barceló displayed his works in some of the most important museums of the world, among which we can mention Boston’s Institute of Contemporary Art, New York’s Museum of Modern Art, Centre of Art Reina Sofia in Madrid and Centre Georges Pompidou in Paris. He participated in Documenta in Kassel, at Biennial of Venice. Miquel Barcelo’ currently has residencies in Paris, Majorca and Segou in Mali.