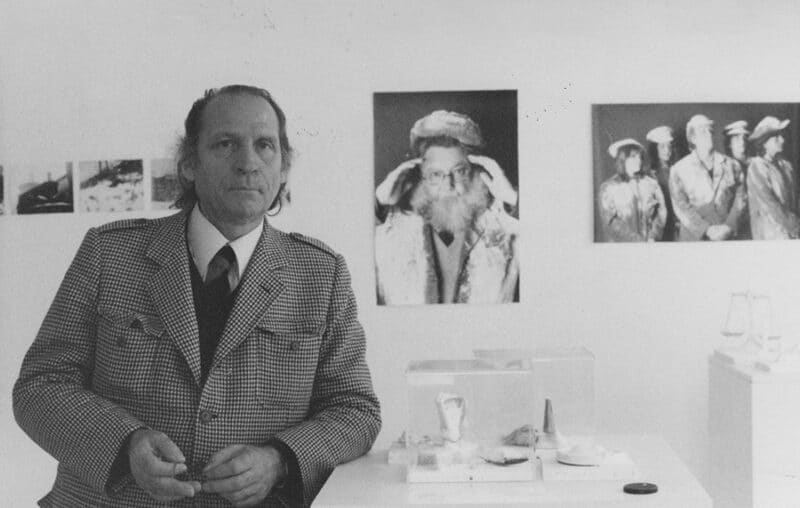 Remo Bianchi, called Remo Bianco in the artistic field, was born in a suburban area of Milan on June 3rd 1922. In 1937, after having carried out many jobs to earn his living, he attended the evening courses of drawing at the Accademia di Brera in Milan. Here the painter Filippo de Pisis noticed him and became his tutor. During the Second World War in 1941, he was enrolled in the navy as a machine-gun pointer on a destroyer ship. The ship was hit during war fights and he was rescued by the English and interned in Tunis. He returned to Milan and to Brera in 1944. Between 1945 and 1950 he painted some oil figurative paintings influenced in particular both by French postimpressionism, especially Rouault and Cézanne paintings, as well as Picasso. At the end of the 1940s he created the early tri dimensional works and the early plaster casts (Impronte, Imprints) of humble objects – such as tracks left by tires, asphalt cracks – at which he looked as “traces of man”.  During the early 1950s he was close to Lucio Fontana’s researches on Spatialism, including in his works stones, glass fragments and creating simultaneously works that he called “Nucleari”, characterized by a strong effect of material. He did some abstract works on assembled plastic or glass sheets (3Ds). In January 1952 he participated for the first time to an exhibition “Autoportraits of contemporary artists” and to “Premio Gianni 1952” at Naviglio Gallery in Milan. In October his first solo exhibition took place at Cavallino Gallery in Venice. In 1955, thanks to a scholarship offered by Virgilio Gianni, he took a trip to the United States. He visited an exhibition of Alberto Burri for the first time and learned about Marca-Relli’s, Donati’s and Kline’s works as well as the action painting of Jackson Pollock, whose influence would have been fundamental in developing the Collages. In 1955 he exhibited his 3D works at the Village Art Centre of New York. Once back in Italy, he lost his tutor De Pisis dead in 1956.  In the same year he wrote the Relief Art manifesto to which were also related the Sacchettini – Testimonianze works, in which he packaged some small everyday objects – often related to the childhood world – into small plastic bags. In 1957 he began the series of Tableaux Dorés, the abstract works made with golden leaves. Between 1959 and 1960 he began works with Sephadex and studied its physical and aesthetic properties. The artist also studied some immaterial sculptures as well as some fragrant sculptures and sculptures moved by the wind or by the walking movements of visitors and he accomplished the unstable sculptures (1960) based on the theme of movement. In 1962 he travelled to Iran and experimented works such as the opere condizionanti. Two years later he published the first “Manifesto dell’Arte chimica” [Chemical Art manifesto] and exhibited the Impronte Viventi [Living Imprints] at Cavallino in Venice. In Carrara he wrote the “Manifesto della Sovrastruttura” [Superstructure manifesto] and began the Appropriation’s Cycle [Appropriazioni]. Therefore he began to use the module of the golden leaves as a “sort of trademark or personal seal, heraldic, overlapping it on reproductions of other artists’ work, magazine covers or other already existing illustrations (…)”. Between 1969 and 1970 he began the Elementary art cycle. During the 1970’s his art also included performances and interaction with the public in works such as Idee per una scala, an autobiographical installation presented at Naviglio Gallery in 1972 and Sadico Mistico Elementare written and played by himself at Teatro Angelicum of Milan in the same year. In 1977 the exhibition designed by art critic Miklos Varga La realtà improntale took place at the International Arts Gallery in Rome, where there was a comprehensive selection of the works of his entire career. In 1978 he participated at the exhibition “Metafisica del Quotidiano” at GAM Museum in Bologna and the year after at “L’opera dei Celebranti. Discorso sul Museo”. In 1982 the artist suffered from serious health problems and was hospitalized in Trento. A year later the Museo delle Albere of Trento directed by Gabriella Belli, dedicated a retrospective exhibition to the artist. He passed away in Milan on 23rd February 1988.