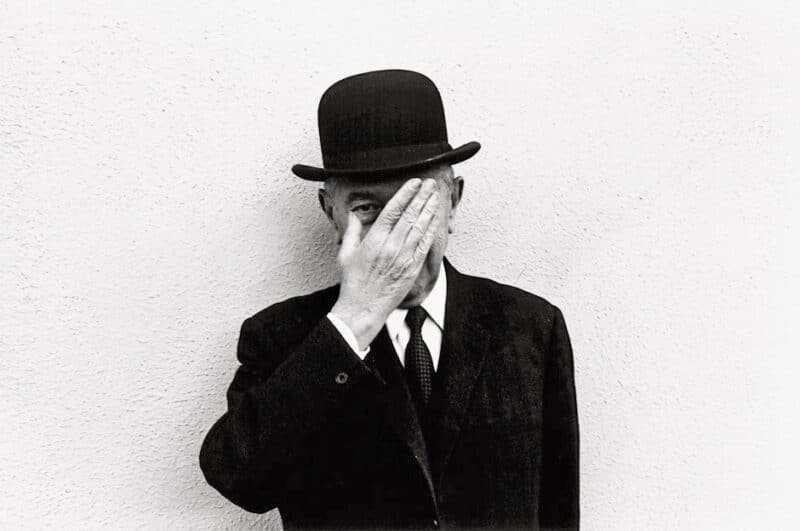 René François Ghislain Magritte was born in Lessines in Belgium on 21st November 1898 and he was the oldest of three sons. Magritte’s young world was upset by a destructive blow in 1912, when his mother committed suicide by drowning herself in a river. Magritte found solace from the tragedy in movies and novels and especially through painting. His earliest surviving works from this era were realized according to in the impressionist style. However, in 1916 he left home for Brussels, where for the following two years he studied at Académie Royale des Beaux-Arts. Although he was ultimately unimpressed with the institution, he was nonetheless exposed to emerging styles such as cubism and futurism, which significantly altered the direction of his work. After a brief stint in a wallpaper factory, he found work as a freelance poster and advertisement designer while he continued to paint. During this period Magritte saw the painting The Song of Love by Giorgio de Chirico and was so struck by its imagery that it sent his own work off in the new direction for which he would have become known. Placing familiar, mundane objects such as bowler hats, pipes and rocks in unusual contexts and juxtapositions, Magritte evoked themes of mystery and madness to challenge the assumptions of human perception. With early works such as The Lost Jockey and The Menaced Assassin Magritte quickly became one of the most important artists in Belgium and found him at the centre of its nascent surrealist movement. But when his first one-man show in 1927 at the Galerie le Centaure was poorly received, a disheartened Magritte left his homeland for France. Settling in the Perreux-sur-Marne suburb of Paris, Magritte quickly fell in with some of surrealism’s brightest lights and founding fathers, including writer André Breton, poet Paul Éluard and artists Salvador Dalì, Max Ernst and Joan Miró. Over the following few years he produced important works such as The Lovers and The False Mirror and also began to experiment with the use of text, as seen in his 1929 painting The Treachery of Images. After the war, Magritte finalized his break with Breton’s branch of surrealism when he and several other artists signed a manifesto titled “Surrealism in Full Sunlight.” With the arrival of the 1950s, Magritte enjoyed ongoing international interest in his work and continued his prolific output. In 1951 he was commissioned to paint a cycle of murals for the casino at Knocke-le-Zoute, a town on the Belgian coast. Completed in 1953 and titled The Enchanted Domain, they were a celebration of some of his best-known images. More commissions followed around Belgium, as did major exhibitions of his work in Brussels and at the Sidney Janis Gallery in New York. Some of his most important works from this period included the paintings Golconda and The Glass Key. He also introduced the now-iconic apple into his work, most recognizably in 1964’s The Son of Man. Despite having been diagnosed with pancreatic cancer in 1963, Magritte was able to travel to New York City for a 1965 retrospective of his work at the Museum of Modern Art. Magritte also explored other media during this time, making a series of short films that featured his wife, Georgette, as well as experimenting with sculpture. After a period of prolonged illness, on 15th August 1967, René Magritte died at the age of 68.