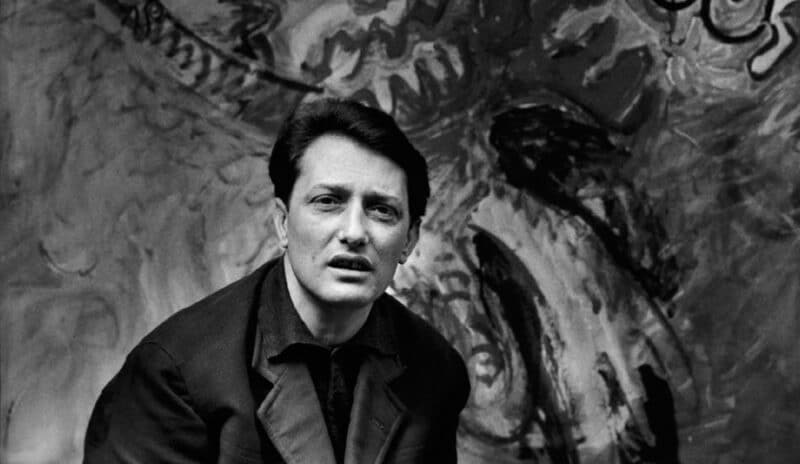 Tancredi Parmeggiani was born in Feltre on 25th September 1927. After having spent his childhood at Belluno where he attended high school into the Silesians’ college, in 1943 he interrupted the classical studies to sign in the Academy of Fine Arts of Venice, following the classes of the Free School of nude held by Armando Pizzinato. During this period he met and became friend of Emilio Vedova. In 1946 he left for Paris where he came to know the vanguards of the first half of the century. The following year he came back to Italy and he worked and lived between Feltre and Venice. Here in 1949 he presented his first personal exhibition supervised by Virgilio Guidi at the Gallery Sandri. In 1950 he moved to Rome, where he started to collaborate with the group Age d’Or and in 1951 he participated to the First Exhibition of the Italian Abstract Art at the Gallery of Modern Art in Rome. Subsequently he met Peggy Guggenheim in Venice and she gave him a studio and bought some of his works. He won all the criticism and had a very positive perspective for his future in front of him. In 1952 he received the Graziano’s Reward for his painting and, with some other artists; he subscribed the manifesto of the Spatialism, a movement created in Milan around 1947 by Lucio Fontana. In 1952 he exhibited at the Cavallino’s Gallery in Venice. In 1953 he was at the Gallery of the Naviglio in Milan with an introduction by Peggy Guggenheim and Virgilio Guidi and he was also invited to the Italy-France exhibition in Turin, where he exposed in the room near that of Hans Hartung. In 1954 he participated to Tendances Actuelles with Pollock, Wols, and Mathieu at the Kunsthalle Bern. In 1955 he broke definitely his collaboration with Peggy Guggenheim and left for Paris where he met Dubuffet, Asger Jorn, and Karel Appel and exhibited on a collective at The Stadler’s Gallery. During the following years he exposed at the Saidenberg Gallery in New York, at the Hannover Gallery of London, at The Selecta Gallery in Rome and he participated to the Carniege International of Pittsburgh. In 1958 he married Tove Dietrichson, a Norwegian painter and they had a daughter and a son. In the spring of 1960 he came back to Milan where he cooperated steadily with the Gallery of the Ariete. In 1964 he joined the Venice’s Biennial and on 27th September, he took off his life throwing himself on the Tiber.