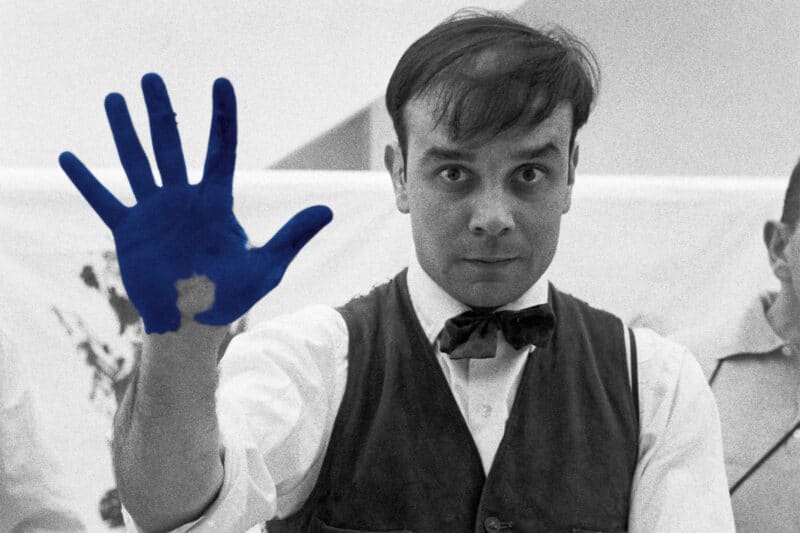 Yves Klein was born in Nice in 1928 from Fred Klein, a landscape-painter and Marie Raymond, one of the first informal painters in Paris. Under the influence of his oriental studies, he was attracted by martial arts, in particular by Judo, which he started practicing in Nice in 1946. His first painting attempts and the discovery of the symbolic value of pure colour are dated back to this period. It’s the birth of first monochromatic experiments, among which we can find ‘the painting of a completely light-blue sky’ (1946) and ‘monochromatic fingerprints and footprints’ (1947). Together with the maturation of his artistic inclination, we need to signal the start of his friendship with painter and sculptor Armand Fernandez Arman. Klein went to England, where he was offered a job by frame maker and gilder Robert Savage. He finally had a chance to display his first monochromatic works under the name ‘Yves’ in some private halls (1950). In 1951 he was in Italy, while in 1952 he left on a trip to Spain. From now on there was an intensification of Klein’s artistic production. In 1955 his first exhibition took place in Paris at Gallerie des Solitaries and at the hall of Lacoste editions. Yves worked as if possessed by a creative genius and in this productive period he covered some canvases completely in that kind of deep blue which he called I.K.B (standing for International Klein Blue). These particular works were the core of the exhibition ‘Onze propositions monochromes’ at Gallery Apollinaire in Milan. This was a period characterized by several exhibitions. In 1958 we can also witness the first attempts to employ some ‘living brushes’, created with the assistance of his friend and Judo theorist Robert Godet. It must also be pointed out that in 1959 Klein met Hains, Tinguely and Restany at Biennial of Paris for the first time: it’s the anticipation of next year’s conference which would have given birth to the group of “Nouveaux Réalistes”. The manifesto edited by Restany is signed by some of the major artists of that time, like: Arman, Dufréne, Hains, Klein, Raysse, Spoerri, Tinguely and Villeglé. César and Rotella were absent from the conference but joined the group soon afterwards. Klein started making relief-moulds of the bodies of his dearest friends Arman, Raysse and Pascal, made in blue-painted chalk (expect for Arman’s, which had a golden bottom). In May he realized his first cinematographic works for Mondo Cane. In May 1962 he had two heart attacks and on 6th June, after a third attack, he passed away in Paris. Two months later his son Yves Klein was born in Nice.