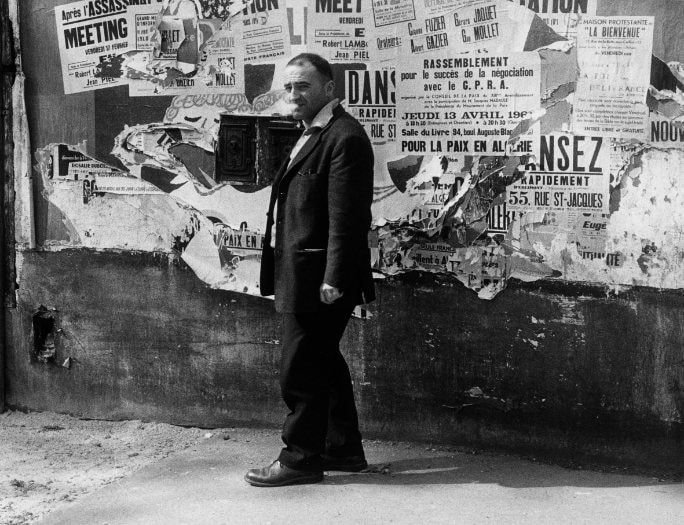 He was born in November in 1926 in Saint-Brieuc, France. In 1945 he entered the Atelier of Sculpture of Ecole des Beaux-Arts in Rennes, where he met Jacques de la Villeglé. He arrived in Paris in October and collaborated with E. Sougez to realize the photographic services of France Illustration. His first abstract photos were dated back to 1946 and 1947, taken by means of a circular reflector, provided with small mirrors which multiplied objects. In March 1948 there is the publication of one of his picture in Plaisir de France along with the discovery of grooved glasses and hypnagogoscope lens. In 1949 he made his first lacerated affiche. He purchased a 16mm camera and shooted, with Villeglé the work ‘Loi du 29 Juillet 1881’. They brought to life an Affiche lacérée: Ach Alma Manetro. Exhibitions of Hypnagogical photos took place at Librairie des Nourritures Terrestres in Rennes. In 1950 he started the movie ‘Pénélope’ (1950-1954), which remained unfinished. He invented a concept of ultra-letter and dedicated himself to ‘lettres éclatées’ (i.e. scattered letters) through grooved glasses. He was present at the recital of poems by Francois Dufrene. Two year later he published ‘When photography becomes the object’ in the 5th issue of Photo Almanach Prisma and in collaboration with Villeglé, ‘Hépérile éclaté’, infused with a phonetic poem by Bryen: Hépérile. In 1964 he deformed some optometric scales with grooved glasses. He typographically divided the text ‘Il Nouveau Réalisme’ by P.Restany and ‘The Baptism of the Object’ in the catalogue of Salon Comparaisons. At Gallery of Leone in Venice he displayed a huge match box illustrated by the tale ‘L’Ane Vetu de la Peau de Lion’, staging characters Seita and Saffa. From 1968 to 1971 he lived in Venice. During Biennial éclatée at Gallery of Elefante in Venice, he displayed the covers of the catalogues of every national pavilion of Biennial 1964 on panels made in plastic fibre deformed by grooved glasses. In 1970 he participated in Documenta 4 in Kassel, with three huge match boxes and at the 10th anniversary of Nouveau Réalisme in Milan with the ‘Torte de Milan’, a gigantic cake with a thousand candles, which was exhibited at Gallery Sant’Andrea. In 1971 after a period of time in Italy, he went back to Paris and the epoch known as ‘Delage’ began. In 1982 during the retrospective exhibition of Nouveaux Réalistes in Nice, he displayed some photo-rebuses consisting of objects regarding the history of the movement: books by Pierre Restany, bonbons monogold’, jams ‘Les vérités de La Palisse’ and etc. In 1991 he was in Rotonda della Besana in Milan and participated in the exhibition ‘L’Objet de la Sculpture’, dedicated to contemporary French sculpture, where Hains exposed ‘La Foire des Ski’, a palisade entirely made up with skis.